Hi guys! Antony here and this is our new and extremely important video about Yield Nodes! Because today I will tell you about my full personal detailed audit of all funds in the whole Yield Nodes project which I made with Steve and Urs in the real time! Additionally, as always we will check our current results and I will show you our new withdrawal in 15,000 EUR which we should get to our wallet at the beginning of March! Let's start it!

So guys as you remember profits for the first week of February was added and despite the instability it was a really good 1.6%! But as you can see profits for the second week was added too and it's a just amazing 3.4%! Now I really hope to see even more than 11% for the current month! Very nice!

Yield Nodes results for the second week of February 2021

Additionally, as you can see, we made one more withdrawal in 15,000 EUR and we should get it at the beginning of March and of course, as always, we will show you it in our wallet!

Well guys, now let's talk about audit and as you understand full audit and revision it's the full verification that the project is real and for all deposits guys really set up nodes and masternoded coins to generate profits for every without any exceptions Yield Nodes investor. Also it's a full verification that this is not just one more ponzi or financial pyramid or somethink like that. Moreover, it's a really good opportunity to see what actually happens with our money inside the Yield Nodes project and, as you remeber, in interview with CEO of Yield Nodes project Steve which was released three weeks ago I mentioned:

Yeah, thank you again for your invitation, Steve! We tried to do that at September, tried to find some flights, after that at November, now it's January but still Corona virus putting up roadblocks, but I really hope that in the nearest future we will be able to visit you guys in Malta!

And after that to make things much more easier Steve and Urs decided to make full ONLINE audit and revision of all funds in Yield Nodes project. They contacted me and first of all guys sent to me and asked to fill up and sign Non-disclosure agreement! They need it to be sure that I will not share information about numbers, amounts and other private data because it's really important thing for safety and other. 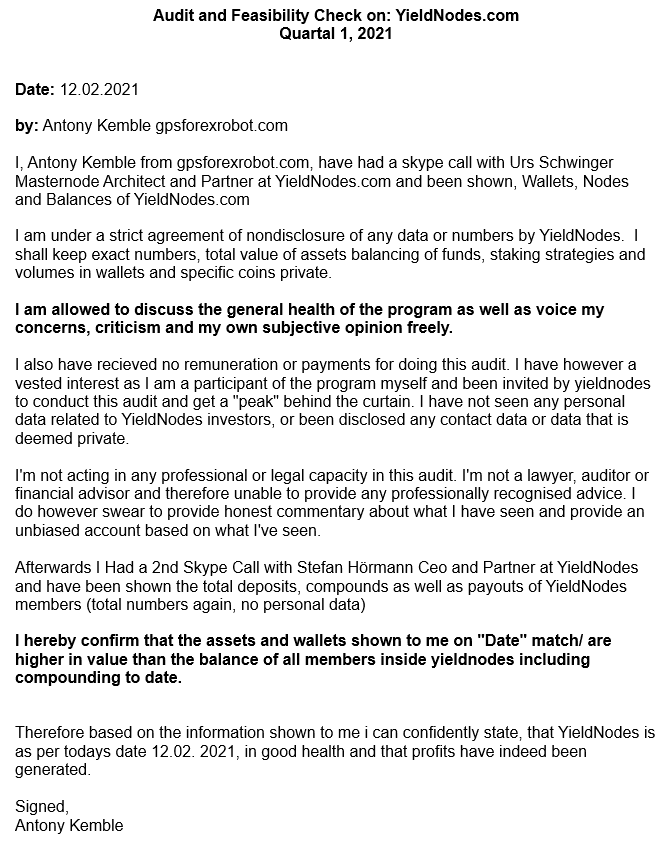 As you can see I will have Skype call and will see wallets, nodes, balances and other in Yield Nodes. Also, I am under a strict agreement of nondisclosure of any data or numbers by Yield Nodes. Additionally, I am allowed to discuss the general health of the program as well as voice my concerns, criticism and my own subjective opinion freely. I also have received no remuneration or payments for doing this audit. And I swear to provide honest commentary about what I have seen and provide an unbiased account based on what I've seen. Moreover, I confirm that the assets and wallets shown to me are higher in value than the balance of all members inside Yield Nodes including compounding to date.

Well, after that we started from the Skype call from Steve: 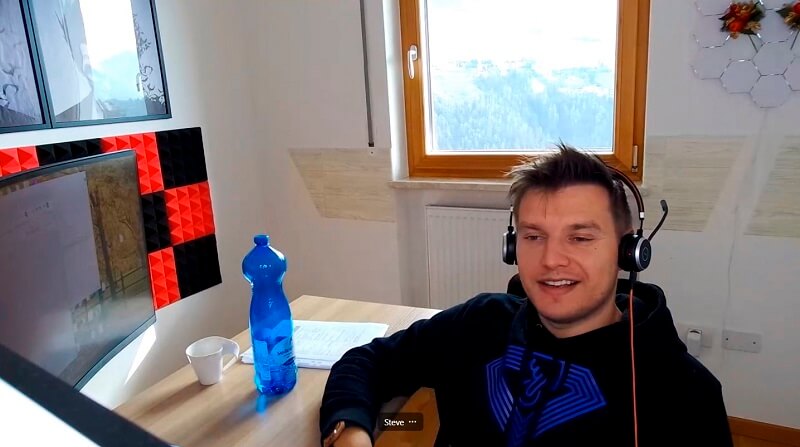 He showed me his personal member area created specially for developers which is also on the yieldnodes.com website where I was able to check Yield Nodes total traded balance, total withdrawable balance and of course total invested balance which I will compare with data from Urs in the next Skype call. Additionally we checked info about total users registered, total users deposited and Steve showed me the process of pending deposits approval and other. But it's also important to note that Steve NOT provided any users personal data during our conversation and I can mention that guys are really responsible in this matter and this is pretty good I should say. In general we talked near 20 minutes and I got a message from Urs and he mentioned that he is ready and we can start our audit from his side.

After that it was a call from Urs and we started our check up of Yield Nodes funds. 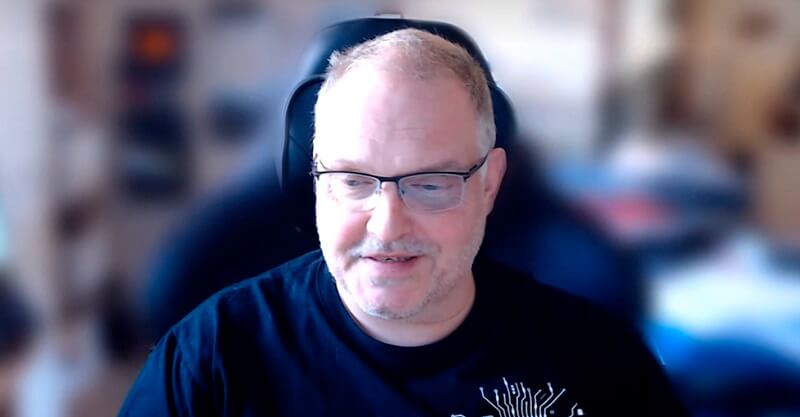 Urs showed me a big table with assets and their values and we compared every value with every masternode for every asset. We checked all wallets, VPS servers, MasterNodes, talked a lot about system protection and many other. We calculated balances together with Urs and it wasn't a big surprize for me but everything matched on 100% and moreover, guys have quite impressive reserve to cover all possible problems in case if they happen. In general, full amount was significantly higher than Steve showed and I can say it was in near two times bigger reserve. Moreover, I want to mention that we talked a lot with Urs about physical part of the Yield Nodes project. The main thing is that guys not just sit near PC and masternode coins but they plann huge physical projects to provide a higher price to coins which they masternode, so it's a really serious approach here guys!

I want to mention that I had such a long and detailed conversation with Urs for the first time and I can say with full responsibility that this is just a genius in his field, after our converstaion I gained incredible confidence in the project and a feeling of complete peace of mind for my invested funds. Urs devotes himself to his work and most importantly he does it not because of money, but because it's his real passion and moreover he's incredibly smart person guys! So, I can say with 100% assurance that guys completely deserve all this success with Yield Nodes project!

Well guys, above in the Non-disclosure agreement cricisism was mentioned and it's necessary to say something about that. I made some analyzes in my head after all what I have seen and came to conclusion that my opinion is the same, like Steve mentioned in intervew and here it is (video with time code):

I think this is really nice words guys and sincerely, I have the same opinion here about the whole Yield Nodes project. Check all information about it on our Yield Nodes Monitor webstie with many explanations, videos, deposits, withdrawals, secrets, last news and many other. After that make your own independent decision about will you join the project or not. It's the best way I think.

Now I suggest you to check current Sapphire rates. As you remember, it's a main coin of Yield Nodes project and as you can see it's growing very well. And it's necessary to say that it's not just one day grow but really stable growth during years and this is show us one more time why Yield Nodes so stable project. 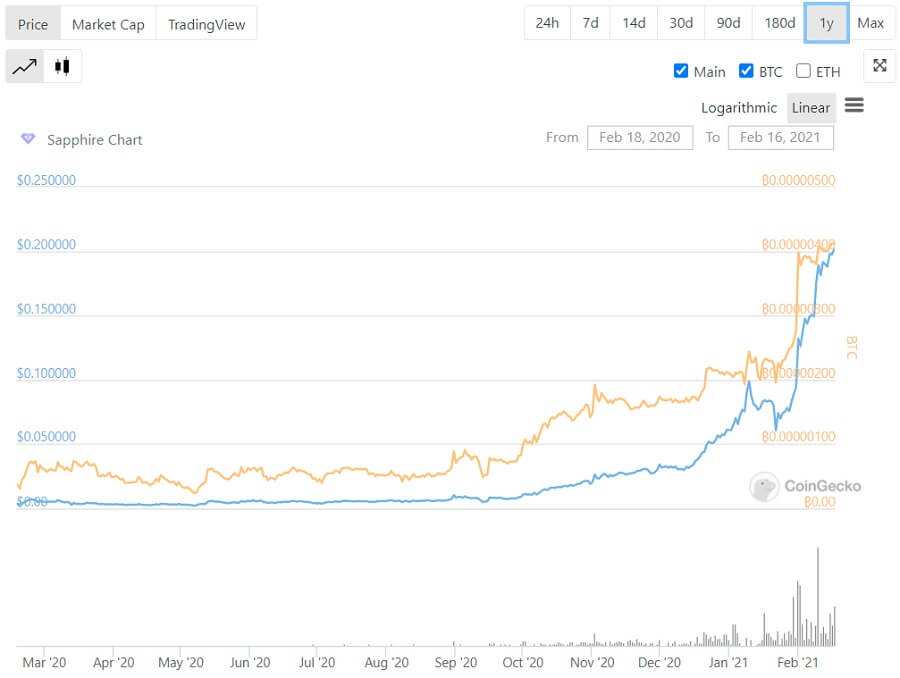 By the way, I want to mention one more important thing: Steve showed me even his own investments in project and I can assure you guys that it was impressive and we can say that this is one more time shows us that they really believe in what they do because it always shows the truth when you show how much of your own money you invested!

Well guys now it's your move to decide will you join Yield Nodes project or not!

Moreover, please don't forget that if you will register through our link you will get:

And ones again guys! Hurry up with your deposits, because I really don't know exactly how many new users the Yield Nodes system will be able to accept.

Well, as always we really happy to work for you guys and please share this video with your friends - you will help us a lot. Don't forget to subscribe to our:

to always have fresh and the most important information in time!

Thank you for watching guys and see you inside!

HAVE SOME QUESTIONS ABOUT YIELD NODES INVESTING?